Introspection from the Australian desert 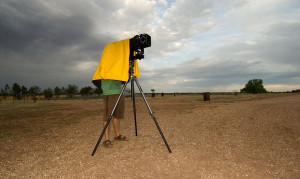 This week on Spotlight, we are joined by German-born photographer Tobias Titz, discussing working full time as a professional photographer, as well as his incredible new exhibition ‘Marnti Warajanga’, on display in Canberra, the capital city of Australia..

The Exhibition: In Marnti Warajanga you will meet Indigenous Australians from the Pilbara region of northern Western Australia, and non-Indigenous people who have worked closely with their communities. In their own words they bear witness to momentous historical movements and reflect on their ongoing work for social and political change at a community and national level.

In Tobias Titz’s unique collaborative portraiture process, each person is photographed with a large format camera using Polaroid Type 665 film. He then photographs the same space without the person in it. Following this, the subjects write something of their choice into the wet ‘empty’ negative. The texts relate to questions about major events such as the Pilbara Strike of 1946, the 1967 Referendum and the 2008 Apology to the Stolen Generations.
Tobias says that providing a place where often long-buried stories can be told “allows us to understand where we come from and how to move forward”.

Toby, thanks for joining us on Spotlight. Tell us a little bit about yourself and how you came to be a photographer living and working in Melbourne Australia…

I grew up in Germany and studied photography in Munich where I was living and working as a freelance photographer. In 2000 I met my wife who is Australian – that’s how I came to Melbourne.

What kind of photography do you find yourself mainly involved in? (Client base etc)

I work as a commercial photographer but I also make sure to put some time towards my personal projects. One of these personal projects resulted in “Marnti Warajanga – we are travelling”, which is currently exhibited at the Museum of Australian Democracy in old Parliament house in Canberra, Australia’s capital city. For those thinking about turning a passion for photography into a career, could you give any advice?

I think it’s important to keep it fresh – find interesting topics do personal work never stop observing – there are so many interesting stories out there.

Your latest exhibition Marnti Warajanga–we’re travelling is a collaboration between the Museum of Australian Democracy, Wangka Maya Pilbara Aboriginal Language Centre and yourself. Could you tell us how this project came to be?

It all started in 2007 I got in contact with  wangka maya the Pilbara aboriginal language centre and we decided to do a project about the 40th anniversary of the 1967 referendum. From there it developed over the years and resulted in the “Marnti Warajanga” exhibition which will tour Australia for 5 years. The technical process you decided on was very interesting for this unique collaborative project. Could you tell us about it?

Usually the subject in a portrait has no possibility to interact with the photo.  The subject can relate to the photographer as the shoot progresses, but once the shutter has fired, that’s it.  I thought I would give them the opportunity to comment or contribute to the image itself, that I had just shot.  Normally a portrait is just a single image, but I thought I would extend the process by giving the subject the chance to have a direct input to the finished piece. When you ask people to have an input – to leave a mark, it gives them an active role not a passive role.

I take 2 photos the first one is the portrait photo the second one is a photo of the background the subject scratches their comment in the second empty negative.
I use a large format camera and Polaroid 665 film.

How did you grow developmentally as an artist during this time?

That’s hard to say… what I can say though is that going to these remote communities and meeting these people is a very enriching experience.

Thank you for joining us on Spotlight Toby. Where can people find out more about your work? You can visit the exhibition in the museum of Australian Democracy in Old Parliament House in Canberra till February 2011. Otherwise visit www.moadoph.gov.au and check out my website www.tobiastitz.de.

Shooting Stars? Not Paul Blake (But Jesus Will Do)

Interview: The transitions of life, as portrayed by Helen Masacz.