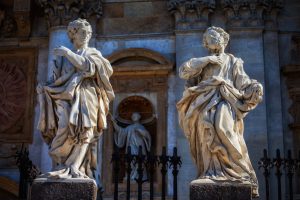 Picking a truly enticing or original holiday destination can be a tricky task for an artist, whether amateur or professional, especially when there are competing priorities to consider. Perhaps the expense associated with your practice is forcing you to consider more budget-friendly cities, or maybe you’re simply seeking a change of scenery from the familiar scenes of London or New York?

Whatever your priorities as an artistic traveller, the following destinations should provide plenty of inspiration and stimulation, while also catering for your more common touristic needs.

This especially friendly and fun-loving corner of North East England is similarly uninhibited in its passion for fine art, with the now world-renowned BALTIC Centre for Contemporary Art, in nearby Gateshead, demonstrating the depth of cultural richness to be found on both sides of the River Tyne.

Whether you sample the largely 19th-century collections of the city’s oldest art gallery, the Laing Art Gallery, or discover such venues in the thriving post-industrial Ouseburn area as the commercial Biscuit Factory or the open-access Northern Print studio and gallery, Newcastle has an energising influence on artists of all inclinations.

The world’s only island city-state has long had something to offer to the energetic creative, with such locations as Victoria Street, Aliwal Street and Haji Lane having become recognised in recent years for their abundance of street art.

However, Singapore’s cultural charms are by no means solely those of the ‘underground’ variety, with National Gallery Singapore — opened in November 2015 — a firm indication of just how far Singapore has come in its journey to the status of global arts epicentre.

National Gallery Singapore showcases the biggest collection of Singapore and Southeast Asian art in the world, complementing such other cultural draws in the city as the Orchard Art Trail and Civic District Art Trail. The former consists of a number of outdoor art installations in the largely retail-centric Orchard Road area, while the latter evokes Singapore’s more distant colonial past.

Kraków is widely regarded as Poland’s cultural capital. That is partly on account of a rich inheritance of prestigious and long-established museums and galleries like the National Museum, which boasts a 780,000-strong collection of art objects encompassing classical archaeology, modern art and everything in between.

However, the city is by no means merely dedicated to the slightly musty arts of the past — such innovative and experimental contemporary art spaces as MOCAK, Olympia Galeria and Gologorski Gallery make sure of that.

With San Francisco and San Jose so close by, why should artists head to Oakland, which is merely California’s eighth-largest city? Well, first of all, you will find plenty of creative types here seeking a relaxed Bay Area vibe without the hefty rents. Indeed, you may struggle to find any city in the United States that boasts such a high concentration of artists per capita.

But what of Oakland’s attractions to artists on the move? Although intriguing galleries can be spotted in various parts of the city, it is the Uptown area that seems to have become a particular focus of development in recent times, winning renown due to such eye-catching institutions as Johansson Projects, Vessel Gallery and Joyce Gordon Gallery.

While Melbourne’s cultural merits certainly aren’t under-appreciated in wider Australia, not everyone from outside the country necessarily appreciates the depth of choice that it can offer in its art spots.

Even if you are a previous visitor and have taken in such well-established artistic sights as the National Gallery of Victoria and the Australian Centre for Contemporary Art (ACCA), you may not be so familiar with lower-profile institutions like Gertrude Contemporary, located in a huge converted warehouse in bohemian Fitzroy, or the Centre for Contemporary Photography (CCP).

Alternatively, if all of the above attractions are a little mainstream for you, why not discover the reasons for Melbourne’s status as one of the international street art capitals by visiting such sites as Hosier and Rutledge Lane — opposite Federation Square — or Centre Place, which you will find between Collins Street and Flinders Lane?

While many of the world’s most obvious tourist destinations also happen to be some of the most rewarding sites for artists to visit, no creative person would be well-advised to stick to the same old, overly trodden paths. Which less-than-typical art epicentres have you discovered on your own travels?

An art lover’s guide to Edinburgh