How major cities shape up for artists: London 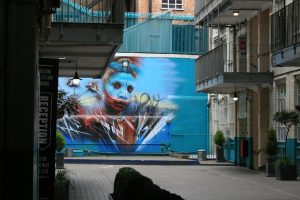 Few major cities have been as synonymous down the generations with the highest echelons of artistic achievement and influence as London, from the days of Sir Anthony van Dyck and Sir Peter Lely to the ‘Young British Artists’ – or YBAs – like Damien Hirst and Tracey Emin.

To this day, there can be no doubt that London remains home to many of the world’s most significant artistic institutions and events. But if you are an artist contemplating setting up home or bolstering your activity in the British capital, what do you need to know right now?

Arty things to see and do in London

What can be said about London’s wealth of artistic sights, sounds and treasures that hasn’t been said already? Well, a surprising amount, actually.

Yes, there are the familiar tourist staples – from the Royal Academy of Arts and the National Gallery to Tate Tate Britain – that continue to produce must-see blockbuster exhibitions. But the capital is also a place to come for lesser-known galleries ranging from the South London Gallery and White Cube to Lazarides Gallery and the Parasol Unit Foundation for Contemporary Art.

Add the continued presence of leading-edge art fairs such as the London Art Fair – the next one set to be held at the Business Design Centre in January 2019 – and Frieze London every October in Regent’s Park, and in London, you still have an endlessly stimulating creative epicentre.

Moreover, you only need to idly wander around many London boroughs – such as Croydon, where RISEgallery’s Arts Quarter project continues to infuse the streets with eye-catching public art – to see that you don’t even need to enter an art gallery to immerse yourself in the UK capital’s artistic spirit.

Tip: Did you know many London’s top galleries and museums have excellent value membership programs that come with handy perks? See this article on which London museum membership is best for you.

What about being an artist in the city yourself?

Sadly, while London is still of absolute ‘box office’ appeal to artists, fewer of them are managing to establish firm roots in the city, with shrinking studio spaces and ever-escalating property prices forcing many to depart the capital altogether.

While organisations like Acme, Bow Arts and Space continue to provide access to studios in London, these spaces are increasingly at a premium, and the asking prices routinely eye-watering.

Indeed, Space chief executive Anna Harding painted a grim picture in her introduction to the recent book Artists in the City: SPACE in ’68 and Beyond, celebrating the 50th anniversary of the organisation set up key Op art proponents Bridget Riley and Peter Sedgley, of the precarious lives now led by many artists in London.

She observed: “Lack of affordable living and working space for low-waged people in London is forcing many to reconsider their future in the capital. Increasing rents underpin the story of artists living and working in London, and the challenges of affording a studio and making work have worsened considerably.”

How affordable is London as a place to live?

In light of the aforementioned warnings, the costs of London life as an artist are as daunting as you might expect. According to Numbeo, those seeking to rent a one-bedroom apartment outside the city centre can expect to be set back an average of £1,222.14 a month, as of December 2018.

Even when rental costs are excluded, a single person in the capital incurs typical monthly costs of almost £800. Such expenses force almost all artists in London to take on a sufficiently lucrative day-job alongside their practice, simply to stay afloat.

What residencies and funding opportunities are there?

If – as may be expected – making ends meet as a permanent resident of London would be a challenge too far for you, there’s always the option of applying for any of the capital’s various still-thriving residency opportunities.

One such possibility is the London Summer Intensive, which is a four-week residency for artists offered by the Slade School of Fine Art, University College London (UCL) and Camden Arts Centre. The programme was established in 2015, with the most recent one having run from 30th July to 26th August 2018; you can sign up to the mailing list for next year’s residency online now.

Several awards and opportunities are also provided by Acme, the London-based charity founded by Jonathan Harvey and David Panton in 1972. One of them is the two-year Associate Studio Programme, which is delivered in conjunction with Central Saint Martins and geared towards BA Fine Art graduates seeking a studio at a highly subsidised rent, together with opportunities for mentoring and critical dialogue.

Will you thrive or fail as an artist in London?

Unfortunately, the answer to this question may depend heavily on your financial resources. Particular advantages of life as an artist in London today include the relative ease with which you should be able to secure a job to support your creative life here, as well as the city simply remaining one of the most inspiring locations on Earth in which to make, experience and talk about art.

The scale of the challenges, however, cannot be understated. Artists in the capital have become used to scrambling for costly and cramped spaces that they are often forced to share with others. Others have resorted to squatting in empty properties – and found themselves at loggerheads with local councils as a result.

Nonetheless, even if you decide against trying to set up home as an artist in London on a permanent basis, the UK capital’s pre-eminence as a place for artists from around the world to exhibit cannot be questioned, and this alone may be advantageous for your career.

As noted by Richard Sant, head of careers and employment at the University of the Arts London (UAL), to the Evening Standard: “When we ask artists what is important to them, many of them believe that the opportunity to be exhibited and recognised is more valuable to them than a large studio space, and that’s London’s appeal.

“And even those who do move elsewhere do still see London as a place their work is exhibited and recognised, despite living far away from the city. It’s international.”

What do current artists make of London as a place to live and create?

As an artist, what is it like to live in London?

Having moved from Central London to Twickenham and now based on Eel Pie Island, I have found that my subject matter has changed considerably. Instead of viewing the Thames from the Embankment, I now cross it on a footbridge twice daily and even find myself occasionally wading through it at high tide.

This location has allowed me to feel at one with the tidal fluctuations and the changing seasons resulting in many misty and varied land and waterscapes. The famous view from Richmond Hill looking down across Petersham Meadow and a bend in the Thames (towards Eel Pie Island) has also provided me with an ever changing source of compositional challenges.

Considering other major cities? Read our Madrid for artists post.

How Major Cities Shape Up For Artists: Madrid

The Basics of Gaining Gallery Representation