How Major Cities Shape Up For Artists: Madrid

By Gavin Lenaghan in Art And Culture, Opportunities, Resources

Barcelona may be the ultimate Spanish city to visit, but it is arguably Madrid that is the Spanish city in which to live, especially so for an artist. One only needs to wander around the capital to see all manner of colour and creativity, both traditional and modern.

There are, of course, potential downsides of life in Madrid – not least the notoriously severe climate that manifests in very hot summers and cold winters.

Nonetheless, with this area of the country home to many of its most celebrated cultural institutions – not least those making up the ‘Golden Triangle of Art’ – it’s understandable that you may be considering its merits as a location in which to live and produce contemporary art.

So, just how much of a destination is Madrid for today’s contemporary artists?

Arty things to see and do in Madrid

The ‘Golden Triangle of Art’ itself, comprising three museums along the Paseo del Prado, scarcely requires introduction for many enthusiasts of both historical and modern art.

The Museo del Prado has captured the imaginations of generations with its treasures by such greats as Diego Velázquez and Francisco de Goya, while the Museo Nacional Centro de Arte Reina Sofía houses Pablo Picasso’s incomparable Guernica. The Triangle’s third member, Museo Thyssen-Bornemisza, caters for gaps in the collections of its counterparts.

Highlights of the local cultural calendar, meanwhile, include the annual DecorAcción, which sees the city’s iconic Literary Quarter become a showcase for installations, street markets and a host of other artistic, design and decorative activity over four days.

What about being an artist in the city yourself?

Madrid’s contemporary art scene is a livelier and more dynamic one that you might think, given the city’s entrenched association with historical and classical art. Established galleries vie with newly set-up spaces, providing an already stimulating backdrop for a host of regular art fairs and events.

February is an especially advantageous time to be in Madrid as an artist, as this is when the city’s annual Art Week takes place, comprising such events as the biggest contemporary art fair in the country, ARCOmadrid, and the youthful and urban Urvanity.

However, it is institutions ranging from Mad is Mad and Mondo Galeria to Galería Rafael Pérez Hernando and Heinrich Ehrhardt that are the key all-year-round frontiers of contemporary art activity in the capital.

How affordable is Madrid as a place to live? 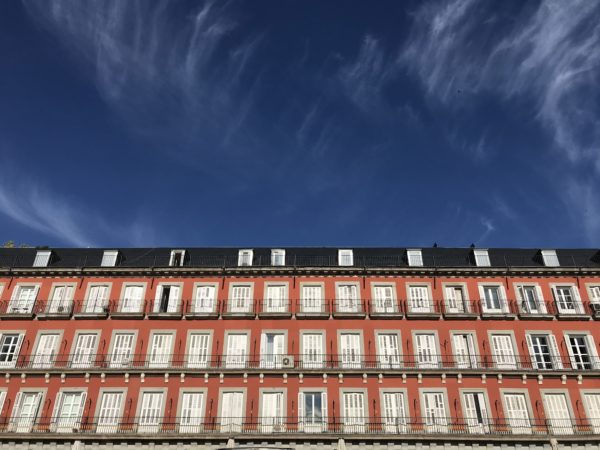 With the capital steadily growing in both economic and population terms as wider Spain continues its spirited recovery from the lows of the late 2000s global financial crisis, it shouldn’t surprise you to learn that the cost of living here is creeping up. Nonetheless, it remains a cheaper option than such other obvious major players as London and Paris.

Indeed, according to Numbeo’s latest indices, rents are a whopping 121.13% higher in the British capital than in Madrid, while day-to-day consumer prices are 36.97% higher.

The Nestpick site estimates that you will require a monthly income of between €1,000 and €1,400 to cover a budget or student standard of living in the city, including home cooked meals and a room in a shared apartment.

For a more professional standard of living, think closer to €2,000 a month – but remember that accommodation in the city centre does tend to be slightly pricier, and probably won’t include parking.

What residencies and funding opportunities are there?

Madrid is the base for Spain’s oldest active artist in residence (AIR) programme, Casa de Velázquez, which was established in the city in 1920, conceived along the lines of the French Academy in Rome, and continues to be operated by the French education ministry.

Matadero Madrid is another key centre for artist residencies in the city, stating its objectives to be to “stimulate the artistic production of work and knowledge, improve the mobility of local and national creators and generate learning environments for local artistic agents”.

Will you thrive or fail as an artist in Madrid?

First of all, the bad news: you are unlikely to get rich as an artist in Madrid. There is a notable scarcity of private collectors in Spain in general, not least because – as explained by ARTnews – art sales are highly taxed, by as much as 21% at one point, although this has since fallen to around 10%.

Furthermore, even among the big collectors that do exist, tastes can often lean towards classical art with a proven worth and provenance, instead of contemporary art that – when taking such forms as performances, videos and installations – can often be much more ephemeral, and therefore less collectible.

As art historian, critic and curator Barbara Rose has observed: “It almost seems that the way to be a successful artist in Spain is to leave. Today, many leading Spanish artists live not in Madrid or Barcelona but in London, Paris, Amsterdam, and New York.”

None of the above necessarily means you won’t do well as a Madrid-based artist yourself, of course. Nonetheless, such factors should give you reason to be realistic and embrace the in-the-moment vibrancy of the capital’s grassroots scene, instead of obsessing over the idea that this move will make you the next Antoni Tàpies, Salvador Dalí or Joan Miró.

What do current artists make of Madrid as a place to create?

We recently quizzed just two of the many current Madrid-based practitioners to give you an insight into what it truly means to live and work as an artist in the Spanish capital in 2018.

What type of artwork do you produce?

As an artist, what is it like to live in Madrid?

Madrid has a lot of cultural life, so you can keep learning about new ways and formats for making art. You can meet other people and create working groups, which helps me to think about new projects to keep learning and researching new ways to work.

What type of artwork do you produce?

Although I don’t completely feel identified with this term, I guess I’m a figurative painter as I paint people. It’s not what I paint, though, that I’m most interested in, but instead the changes that the portrayed subject suffers along the creative process.

As an artist, what is it like to live in Madrid?

Thankfully, the city offers some spaces on its outskirts that are still affordable and they’re hired by artists nowadays. That is the basic ingredient that a city can give to an active artist, as our practice depends on the space to create and produce art to a larger extent. This also helps to create a community among art peers, which makes progress easier and more enjoyable.

I’ve been here for a year now, having previously lived for six years in London, and I’m positively surprised by the cultural scene that our Spanish capital offers. There are always things going on around the city, and of different natures.

← Free Art Events for November 2018
→ How major cities shape up for artists: London

1 comment for “How Major Cities Shape Up For Artists: Madrid”

That is absolutely a fantastic painting and I’ve quite recently perused the bulletin with respect to picture copyright law and it’s exceptionally educational. i really love it.The post was uncommonly profitable for me,it gives me so much idea about painting and use of color combination. Your association aptitudes are incredibly add up to and in addition I enjoyed the experience of investigating the post of yours. I will in fact share this post. incredible prosperity!!