The Story of ArtWeb 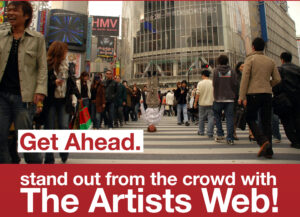 Our story of ArtWeb actually begins as the story of “The Artists Web”. Back in Brighton, in 2005, after designing websites for a number of artist friends, our founder Chris Kirkland came up with the concept of “The Artists Web”—an easy and affordable way for artists to create and manage their own website.

After speaking, emailing and even cold calling a number of local artists, Chris realised he was on to something. He soon teamed up with co-founder Phill Haiselden and in spring 2006 our company The Artists Web Limited was born.

To get the ball rolling and spread the word about our new service, Chris and Phill took The Artists Web to some popular art events. The Artists Web sponsored the popular “Artists Open Houses” website in Brighton and had a stand at The Artists and Illustrators Expo in London.

Chris, being both tech entrepreneur and acrobatic clown, capitalised on his headstand hobby and seized every opportunity to pose for a publicity photo, or to use these stand-out images in promotional flyers.

Even breaking an ankle didn’t stop him!

Within a year, The Artists Web had already attracted hundreds of artists and had created a catalogue of over 10,000 artworks.

In 2007, recognising its international potential, The Artists Web set up an office in Japan and made an appearance at Design Festa, the largest event for independent creatives in Asia.

Although expansion into Asia proved very difficult (cultural and language differences along with an almost non-existent domestic market for buying independent artists’ work), Chris made a number of key connections whilst in Tokyo.

The talented designer Robert Laing (who went on to become founder of Gengo.com and now Farm One), who was also living in Tokyo, worked with Chris on an important rebranding and redesign in 2008.

However, perhaps the most interesting connection was with the original owner of ArtWeb.com.

For months, Chris and Phill had been looking rename the website as theartistsweb.co.uk was long and the .co.uk restrictive to a UK-only audience. Eventually Chris decided to inquire about ArtWeb.com, which at the time was unused. After a little research and emailing, Chris got a hold of the owner Elizabeth by phone, and much to his surprise she was living in Tokyo just a short train ride away! To cut a long story short, Elizabeth’s asking price was far out of reach, but Chris and Elizabeth became friends (after all, it was such a bizarre coincidence that they should both be in Tokyo). And after a couple of years of negotiation and favourable exchange rates, they eventually found a good middle ground—and so The Artists Web became ArtWeb.

ArtWeb All Over The World

ArtWeb’s international connections were not limited to Tokyo. ArtWeb is a true “remote work” company; since 2007, our staff was situated in London, Lisbon, Tokyo, Toronto, California, Amsterdam, Berlin, Bucharest and Bangkok. Since our work is almost entirely online, we’re not restricted to staying in the same location or time zone. At the time of writing, our editor Adriana is in Toronto, our community manager Tom is in Amsterdam, our lead developer Andre is in Lisbon, Chris is in Tokyo and the rest of our team is in the UK.

ArtWeb has continued to grow and change with the times. But some things never change, we’ve always kept our friendly and personal touch, and Chris’s headstand photos continue to creep into our publicity materials every now and then.

Among other accomplishments, we currently boast almost 30,000 registered members and over 300,000 works of art in our database; accumulated thousands of subscribers to our monthly newsletter “The Artists Newsletter”; and take great pride in having ArtWeb shortlisted for the prestigious Innovation in Art prize at Investor Allstars 2014.

A big thanks all the many wonderful and varied artists who have used and continue to use ArtWeb.com for their website and promoting their artwork!

ArtWeb CEO lands on his head at pehcakucha night, Tokyo

Exhibiting Your Art Part 5 – How to Market Your Exhibition