True blue: a brief history of the colour blue in art 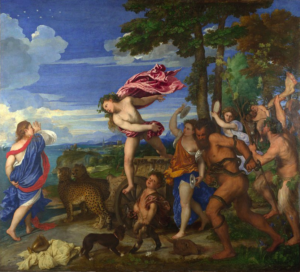 Colours carry significant meaning far beyond that of mere decoration. In the hands of artists, they have the power to tap into our deepest desires as well as alter our perceptions — and even the course of history. That is no more evident than in the case of blue, the elusive hue that reveals itself at the edges of our world, at the farthest point of the horizon and the deepest stretches of the sea. Here at ArtWeb, we delve deep into the colour that has captured the imagination of artists for millennia.

Blue as we know it simply did not exist in early art history. Go back far enough and you will see that the Greeks didn’t even have a word for it. Chemist Heinz Berke notes that humans: “[…]had no access to blue because blue is not what you call an earth color. You don’t find it in the soil.” It wasn’t until the Egyptians discovered the semiprecious stone, lapis lazuli, that blue began to make its mark in art. It was used to adorn the tombs of pharaohs, and even Cleopatra’s famous blue eyeshadow was said to be made from the pulverised stone. It’s rarity in nature made the colour a luxury, and by the time it found its way to Europe in the 14th century, it was the most sought-after shade in the Western world, worth more than five times its weight in gold.

A sacred shade of blue

In 1303, Giotto became one of the first artists to indulge in this exclusive colour, with the frescoes of Scrovegni Chapel. Whilst its walls detail the life of Christ, the ceiling beckons viewers into an expanse of deep ultramarine, dusted with gold stars. For Giotto, heaven was blue, and as the colour came to be associated with the divine, the church sought to control it. Laws were passed prohibiting citizens to wear blue, which was reserved for one figure only, the Virgin Mary, depicted in her signature blue robe throughout the Renaissance and beyond.

It wasn’t until 1523 when Titian liberated the colour from the shackles of religion in Bacchus and Ariadne. By depicting an ordinary bystander draped in cloth of rich blue, he stripped the colour of it’s convention and hierarchical associations.

As the centuries wore on, and the focus of art shifted from the religious to the secular, artists continued to be enchanted by the emotional power of blue. For Picasso, it was the death of his closest friend, Casagemas that catapulted his work into tones of murky greys and melancholy blues. From 1901–1904, he turned to outcasts as his subjects, using blue to transmute the pain and hardship of their everyday lives.

Of course, he wasn’t the only troubled soul to rely on blue to express the psychological depths of human experience. One only need look at the blue that awaits Edvard Munch’s lovers in Kiss by the Window, the same blue haunts Van Gogh’s Starry Night and consumes the dream of Gauguin’s Sleeping Child.

The Blue of Beyond

Yet there’s much more to blue than its gloomy undertones and woeful connotations; for some, it has figured as a key to the sublime. Obsessed with flight, levitation and immateriality, Yves Klein once claimed to have signed the sky as his own work of art. He celebrated the colour blue by creating his very own shade, International Klein Blue (IKB), which he used for a series of almost 200 monochromes. He rejected the idea of representation to arrive at what he considered ultimate creative freedom, to be immersed in a void of pure colour. “The world is blue,” Klein famously proclaimed, “blue has no dimensions; it is beyond dimensions.”

Perhaps this is why it continues to hold such enduring appeal for artists today. It is a colour that exists forever out of reach, just as the blue of the mountains cease to be blue once they’re met. “Desire is full of endless distances,” observed the poet Robert Hass. Blue is the colour of longing for a distance that can never be closed, the tantalizing promise of worlds beyond our own.

French Fancies Fresh From The Palette Of Melissa Sturgeon!

Worlds of colour and detail – spotlight on artist Yoh Nagao