Madonna on Roller Skates, Squashed Behind a Phone Box 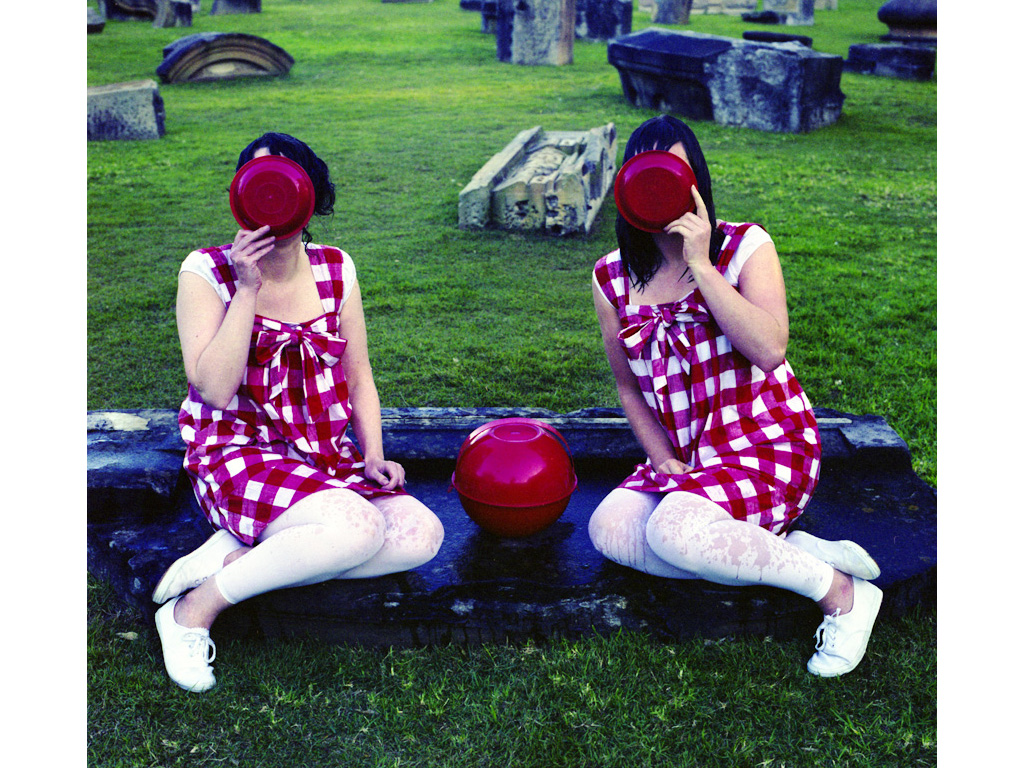 This week the spotlight is on Tai Snaith, a Melbourne-based artist who’s exhibited and performed all over the world from remote Scotland to ultra-modern Japan. She has worked with a variety of diverse media from pen to broccoli and performed in venues varying from gallery openings to being squashed behind a telephone box on the Royal Mile, Edinburgh. She is known in the arts community for organising collaborative and funded works and for her regular slot speaking on Tripple R radio program in Melbourne.

I caught up with her in Tokyo on her third visit to Japan; she’d just been to a flea market and picked up an antique Japanese doll for next to nothing.

What led you to become an artist?

I recall a conversation with my mum when I was small where she asked me what I’d like to be when I grew up. My reply was, “I guess I’ll just be an artist, what else can I be?”.  But after a little thought I asked her “can a girl be the Prime Minister?”. So I concluded “either that or an artist”.

You have an ongoing performance collaboration with Narinda Reeders called ‘Hit And Miss’.  Is there a recurrent theme in these performances?

By pure coincidence we both turned up to a party dressed the same – roller skates, red and white. We did know each other but we weren’t particularly close friends at the time, however we both concluded we should try the same thing next weekend. So next weekend we went to a friend’s gig dressed in suits. Because we were dressed up people expected us to perform, so we started hitting an egg on the dance floor with a stick.  And so it continued.

We found we didn’t like performing though – we can’t act and we just burst into giggles, so we decided to be still.  So for pretty much every installation our bodies were presented as dead objects. There’s a movement known as tableaux vivant (still life).  Before photography, wealthy people would pay people to reenact a painting, motionless, like “the last supper” etc. We started looking into it, but found that holding a pose for more than one hour is really hard. We realised we had been meditating in these positions, because we were breathing and relaxing and started to discuss what we were thinking about. This really brought us together and was really personal.

In terms of theme, we try to keep it playful – as we have nothing to lose but we like it to be a challenge at the sametime, hence the name ‘Hit And Miss’.  We think to admit failure isn’t such a bad thing, it’s an inherent part of creativity. We’re constantly embarrassing ourselves in front of people on purpose – it’s really therapeutic and very different to our own individual work.

What kind of reaction do you get? I think the best reaction has to be the one we witnessed at the Royal Mile, Edinburgh. We were wedged between two phone boxes, our faces pressed against each other for an hour. One little girl came up with her dad and the following conversation ensued!

Girl: “What are they doing”

Girl: “Why are they doing that?”

Girl:“Yes but why are they doing that?”

Dad: “Well I think just because they can”

During another performance where we had to be completely still, we had one kid was shouting at us “move! – stupid girls, come on MOVE!!!”.  It was really hard not to laugh.  One person kissed us; quite hard not to react and stay there.
(You can see more about ‘Hit And Miss’ on their website here: http://www.hitandmiss.me )

Are many of your performances/projects funded or commissioned?

Not usually. I might get an invitation but it will be along the lines of “can you come and do something at an opening – material costs covered”.

However I have been funded for working with groups of people and collaborations.  For example, “New Ruins” was a funded exhibition in old jail – it paid for six Glasgow artists to come to Melbourne and six artists from Melbourne itself.  The show was open for free to public;  it was only open at night and was pitch black so all the visitors were given a torch!

Another example of funded collaborative work was when I approached a private collectors group to sponsor an ‘art in houses’ project. The group would pool their resources and periodically commission or purchase a single new work.  However, we wanted  funding to pair up several artists with home owners and get them to produce some work especially for those houses, which would then be open to the public for viewing. I came up with the suggestion that we use about 70% of the budget to fund the artists material costs and then the private collection would be able to choose one of the artists to commission a new work for which they would receive the remaining 30% of the budget [good business thinking Tai!]. The group loved the idea and it was a great success for all involved.  For my own work I was recipient of Australia’s Runway grant. This funded me to go to Berlin to do some work in “new media”, but all I did was give a talk about my work which doesn’t really have anything to do with new media!

What advice would you have for aspiring performance artists? Daniel Freakly – The Quote Generator; he only speaks in quotes and is travelling the world at the moment

You also create some equally entertaining drawings and illustrations. First up, tell us about your Hirrafes!

I guess I started drawing them out of a subconscious  love of horses and giraffes. Giraffes have an ugly face and horses have a thick ugly neck, so one day I drew a ‘Hiraffe’.  A whole range of charactars have evolved.  In fact there was a period where all I drew were Hiraffes!

They don’t have bodies. There have been suggestions that I draw other similar animals, e.g. Gronky; half-donkey, half-giraffe, a Girony; half-giraffe, half-pony – but this sounded too much like a meat product.

Amongst your collages, The Madonna/Chiwawa made me laugh my arse off.   In fact I think it’s the first image that comes to mind when I think of your work. With your collage is there any deliberate message, or are you just having fun as you make them? The Chiwawa happened by accident.  I was cutting off the ears of  a chiwawa (not a real one!) and the head off a madonna for something else and they both were on the same table at the same time.  Then I realised what a perfect match they were!  I love collage; it’s one of my favourite things – it gives you so much freedom.  You work with these bits and they come together and make their own story; it’s like you’re a channeler.

Do you sell your work or have any of your drawing works been published? I’ve had some of my illustrations published;

What’s next for Tai Snaith?

Thinking about having kids – and travel!

Generally I just strive to keep extending my boundaries and challenging myself rather than just staying happy.  It makes you feel alive.  I like feeling a bit nervous about things. I’d love to be able to achieve bigger things on a bigger scale, not just creating for the sake of creating, to use those skills to do something bigger.

Recently I’ve become aware of the importance of being creative and adding something critical; to work out what you are trying to express and communicate it in language;  “why have I drawn this picture?”.  To this end I spent ten hours the other day, without leaving my apartment, thinking about why I was obsessed with this particular plastic greyhound (that I was considering using for some work).  It really made me think about what’s on the inside of me,; like meditation,v it’s a way to give you time to think. Thank you tai! you can get in touch with tai through her website www.taisnaith.com

Flying on the wings of fantasy & success….

You can take the artist out of the city……