By chris kirkland in Interviews

This interview was originally published on Tokyo Cheapo.

Martin Holtkamp, as well as being an all-round good chap, is a German-born photographer who has built an impressive two-decade career in music and fashion photography in both London and Tokyo. He has to his name numerous commissions that include Supergrass, The Coral, The Prodigy, Chloe Sevigny, and publications such as Elle and i-D magazine.

We caught up with Martin for a post-hanami coffee and chat where we grilled him with questions about how he’s beaten a path through the jungle of professional photography in Tokyo.

Martin graduated from Bournemouth Arts University and then moved to London in 1993. On the same day he moved to London, with portfolio in hand, Martin went straight to the i-D Magazine office to see if he could land some work. He got to speak with founder Terry Jones who offered him some work—and so began Martin’s career as a professional music and fashion industry photographer in London.

“Terry Jones saw me and gave me some work, he said ‘you can fuck up once but not again.'”

Alongside his commercial work, Martin also had his work exhibited in institutions such as The Association of Photographers (UK), Mannheimer Kunstverein (Germany) and various galleries in London.

Martin’s Japan story begins in ’96. On the invitation of some Japanese fashion industry people that he’d helped in London, he came to stay with them in Osaka for a couple of weeks.

Martin had few expectations of Japan before he arrived, but he liked what he saw and those initial two weeks were stretched into three months. His Japanese hosts treated him well, and he started making connections in the Japanese music world.

“I didn’t know much about Japan back then, the first thing I noticed was that everyone had coloured [not just black] hair.”

His Osaka friends told him that Tokyo would be better for work, so he made Tokyo his next destination when he returned to Japan the following year. After almost a year and a half of visiting Japan and making connections, Martin eventually returned to London full-time and continued his career in London.

It wasn’t until 2007 that Martin moved to Japan on a permanent basis.

Building a Career in Tokyo

Martin is quite a rare breed. Among the ranks of professional photographers, even for those at the top of the industry, transplanting one’s career to a completely different continent is no simple feat. When moving across borders there will inevitably be different gatekeepers, different networks, differences in business culture, language barriers and different social conventions.

Martin moved back to Tokyo almost a decade ago, and since then has built up an impressive career. His commissions include portraits of Yoko Ono, Hitoshi Matsumoto, Takashi Murakami as well as editorial, music and fashion clients such as Ginza Magazine, Snoozer Magazine, Johnny’s, Elle, Jocks & Nerds. But how does one build up a career like this in Tokyo?

“I was interesting to people in Japan when I was based in London, and when I first arrived [in Japan] people sat up and noticed because of my i-D magazine work,” Mr. Holtkamp says, “But after I moved here it didn’t continue.”

This is probably no surprise to anyone with more than a smattering of Japan experience, one’s experience as a temporary guest is very different to the day-in day-out of living here longer term. However the virtues of patience and persistence pay off well in Japan.

“If you live here long enough and do quality work, that will be noticed. It takes time to build up a client base, but then people are quite happy to have someone they can rely on.”

Martin told me that clients in Japan like to give you a label, for example when he first arrived in Japan Martin was “The guy who worked for i-D Magazine”. This classically gives rise to a sort of catch-22 when trying to break into something or somewhere new, as Martin said:

“You’ll always get booked for what you’ve done, not what you’re going to do.”

I asked Martin if there’s much “cross-pollination” between his work in fashion, music and other genres like portraits.

“Fashion, Music and Portraits overlap in my work as the genres themselves do.
In the 90s, when I was living in London I hung out more with musicians and naturally I photographed many of them.
These days I receive more commissions from the fashion industry (although I still buy my T-shirts at 7-Eleven).” [A true cheapo! – Ed.]

“Usually I get hired for what I have done before. But there are also cases when a client points out some images on my website, asking me to employ that same sensibility to something that by definition would cover a different category.

“For me it matters more to connect with art directors or editors that share similar aesthetics or respond emotionally to my work, regardless of genre.”

Any aspiring photographers will be pleased to know I nagged Martin for some top tips on working as a photographer in Japan.

“Graphic designers and art directors are very powerful. They recommend the photographer to clients.”

As Martin mentioned, building up a career takes time, and this is in no small part to building up your network and trust. Usually work comes through people you meet or recommendations, and this is particularly the case in Japan. Personal introductions include a sense of responsibility on the part of the person making the introduction, so people tend to only make introductions that they know are going to work well. This goes both ways too—Martin will be a lot more cautious about working with clients contacting him out of the blue.

Often the key decision makers are the art directors or graphic designers. Clients will generally follow their recommendation on which creatives to use for the job. And once a photographer has worked for a client via an art director, it’s not unusual for the client to commission the photographer directly for separate jobs. So art directors are probably the best people to meet for widening your network.

I asked Martin if being a foreigner has played to his advantage (or disadvantage) while working in Japan?

“When is comes to working, it is more important that I connect with clients in a way that goes beyond nationality. Understanding local conventions and language helps, but most important is being somewhat like-minded.”

Indeed Martin said he doesn’t see himself as a foreigner so much,

“After a while you just do your thing and become oblivious to how others might perceive you.”

“Be prepared that they can’t speak English.”

Though Martin talked down his Japanese ability, it’s clearly an asset to his career in Japan. Although he mentioned with big clients you might be fine with English only.

But even speaking Japanese at near fluency isn’t always enough. Martin explained about a recent job at a kimono factory where he was given a tour. The production line and processes were very interesting, but Martin found it frustrating that he would miss many of the intricate details explained in Japanese.

“Because of my good pronunciation, people assume I’m fully fluent so speak in elaborate language which I don’t really understand, and sometimes all I can say is ‘so desu ne*.’ “

*So desu ne roughly translates to “Ah, I see” in English

I asked Martin about any notable celebrity portraits he’d taken and he told me about the time he was commissioned to photograph Hitoshi Matsumoto for The Japan Times. Martin was determined to photograph the famous comedian with a smile on his face, as in most of his portraiture Mr. Matsumoto is looking somewhat gruff, so he came up with a cunning plan.

On the day of the shoot, Mr Matsumoto turned up with a bustling entourage of about 5 people around him, looking his usual serious self. Once Martin was set up for the shoot, he said to Hitoshi Matsumoto “Please don’t laugh”. At first he was confused, but then a moment later he and the whole room started laughing, so Martin was able to snap a smiling Mr Matsumoto. Ironically the final portrait published by the Japan Times wasn’t the smiling photo, and he’s looking his normal serious self.

What’s a typical day in the life of Martin Holtkamp? 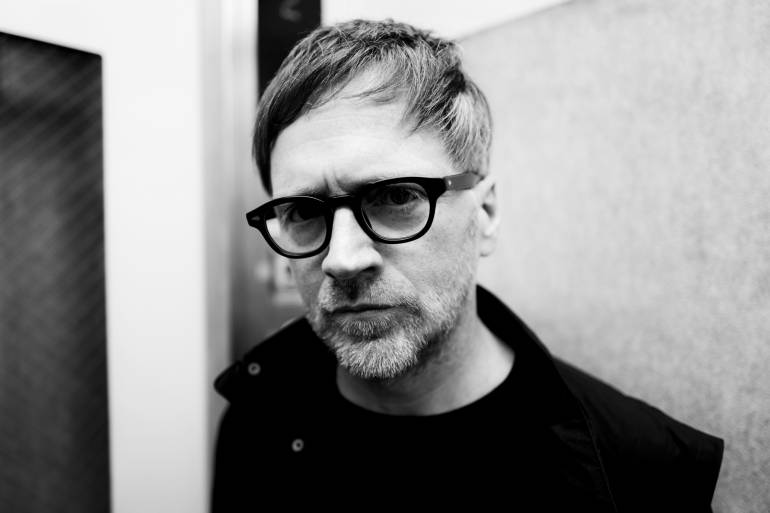 “On a daily basis, I don’t have a clear, structured distinction between recreation and work. I am usually blissfully unaware of public holidays for example. On days when I have a shoot I am either on location or in a hired studio and every shoot is somewhat different.

“Other times I am organising my next shoot, attending meetings, processing images or—much like everyone else—deal with the banalities of modern life.

“I always found it hard to sit in front of a computer screen for too long, so I made it a habit to break up my post production sessions by leaving the house at least once a day, either going for a walk, visiting my local pool, spending time in bookshops or galleries or simply take a short nap.”

A Cheapo Tip from a Pro

And finally since this is a Tokyo Cheapo interview I was sure to ask Martin for any thrifty Tokyo tips, and he replied with this fashion industry gem:

“The cotton T-shirts from 7-Eleven are excellent and you can buy them for 500 yen!”

← What Can You Gain from Visiting Fine Art Degree Shows?
→ An Introduction to the Wonders of the Collagraph