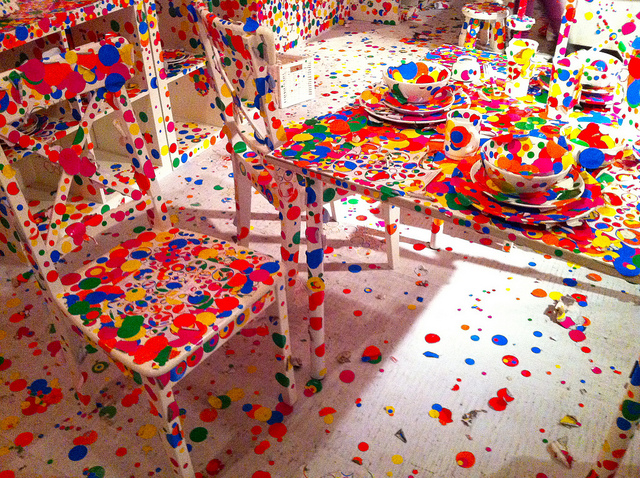 When we talk about art, it is often the conventional methods that dominate the conversation. Yet many contemporary artists are using brave choices of media to portray both rich emotional work and aesthetic beauty, and to make a statement. Here are 5 artists whose masterpieces are a far throw from the conventions of paint and canvas:

Tokyo-born Yamanoto uses only one medium to produce his stunning sculptures, he uses salt. His work is reminiscent of religious mandalas and the meditative ritualism of the execution, as well as the repeat within each of his vast designs, whisper of spiritual depth. Yamanoto has likened his artistic process to that of trying to capture mercurial memories. There is also a poignancy behind his work as Yamanoto’s sister died to brain cancer when she was just 24 and the ripples of this devastating life event seem to writhe at the core of his work. The purifying qualities of salt have given this substance quite the reputation in Japan where it is revered for its life-giving qualities and frequently features in ceremonies surrounding life and death. Yamanoto’s respect for his chosen medium is demonstrated by his behaviour when dismantling each installation. He diligently sweeps up the salt and returns it to the sea, in a ritual that he calls Return to the Sea. Yamanoto considers this act to be as important as the creation of the work. By returning the salt to the water, the cycle is complete in a powerful expression of how life and death perpetually circle. Yamanoto’s work is visually striking and highly unusual, but it is this integrity and honesty at the core of it all that makes it truly breath-taking.

Kittiwat Unarrom’s brazen body bakery will not be to everybody’s tastes but there is no denying the ingenuity and realism behind the work. Each hand-baked loaf is shaped and then meticulously painted to look just like a severed body part. Anatomically accurate and undeniably gruesome, the talent behind this unusual practice is staggering. Coming from a family of bakers, it was not unsurprising that Kittiwat followed in the family’s trade but his fresh take on the tradition has caused a certain amount of controversy and many deem his work distasteful. Unarrom isn’t out to shock though, his bread sculpture is used as the perfect medium for religious and artistic expression. Unarrom speaks about his work being a representation of the transience of life and bread is symbolically a very apt choice of media to reflect this.

Kusama is a prolific artist and writer with a reputation for thinking outside the box. Her project ‘The Obliteration Room’ is the perfect example of how she uses art to urge people to rethink things. She creates visually stunning art in the most unusual manner. In ‘The Obliteration Room’, she furnished a room, which she painted completely white. Everything from the wine glasses and plates on the dining table, to the books in the bookshelves were covered in brilliant matt emulsion. Visitors were invited to stick coloured discs of varying sizes over the surfaces, wherever they felt compelled to. At the end of the project even the floor and ceilings had clusters of colour. The space was transformed and the impact was magnetic.

Erika Iris Simmons is famed for unravelling cassette tapes and film reels to create 3D portraits of celebrities. Using cassette tapes to depict musicians, such as the piece which uses tape to replicate Lauryn Hill’s corkscrew curls and dense eyelashes. She tends to use tape from film reels in her portraits of stars of the silver screen such as a suitably voluptuous Marilyn Monroe, or her elegant portrait of Audrey Hepburn where the reel becomes part of the cellulose image swirling at the center of Audrey’s voluminous up-do. The American artist creates portraits which are not only realistic but also brimming with character and personality. No extra pigment is added, with just the carefully manoeuvred strips of plastic tape forming line and shade.

Orrico is a dancer as well as an artist which explains why his work isn’t just a frenzy of perfectly executed lines, it also captures movement and a very deliberate style of choreography. The Penwald Drawings are a series of huge bilateral drawings that Orrico has produced by using his body as a measuring instrument, with the span of his outstretched arms being the furthest point of each circle. Orrico is fascinated by cyclic motion, energy and geometry. When his energy levels start to flag, it is shown in his work and the pace alters giving a rich variety to the mesh of pencil strokes. Orrico often films the process, making the execution of the art as important as each final piece. Sometimes Orrico uses graphite on paper, other times marker pen on wall. The overall effect is very striking and utterly unique to him.

Whether it is Motoi Yamanoto finding solace in salt and celebrating its cultural connotations, Kittiwat Unarrom finding a new slant for the family business or Tony Orrico fusing his passion for dance with his love of art; all of these artists rejoice in media that may be unconventional but make sense to them personally. All five of these artists have created exception works of art which are unique and captivating. We all fall into the trap of using our own preferred medium to express ourselves artistically. Perhaps for your next art project you could mix things up a bit and experiment? Find a different outlet for an idea, and see where your imagination takes you. The choice of medium itself can say a lot about a piece of art, before it is even created.

8 Artists in control of their branding