By Becky Matthews in Art And Culture 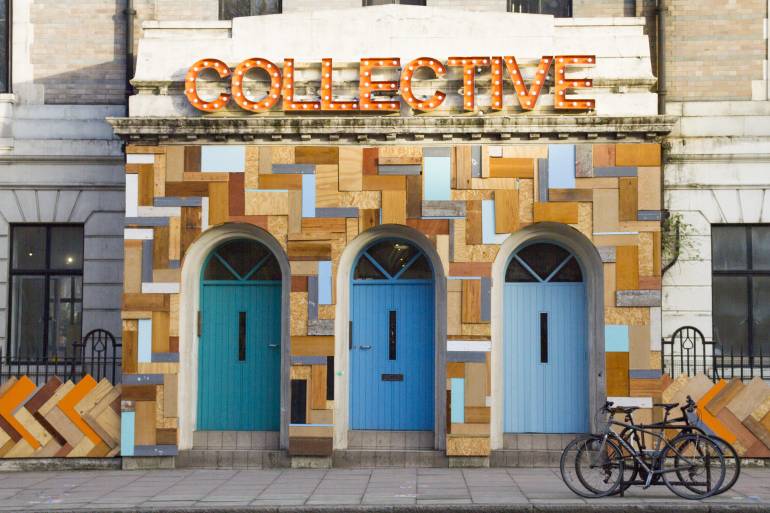 London’s start-up boom is growing, and much of it is going on in east London. However, Camden Collective is bringing creativity and economic regeneration back to NW1, an area that is home to Getty Images, Ted Baker and ASOS. Camden Collective is a registered charity offering subsidised co-working space to creatives. Set up with both private and public funding (it came about through Camden Town Unlimited, a local Business Improvement District, with additional money from the mayor of London and help from Camden Council), it takes vacant and underused spaces and re-purposes them for new businesses.There are currently two ‘hubs’: Temperance Hospital and Base KX. We spoke to Lauren Gillet, Community Manager, about what how the community works together, and why old warehouses in Camden are just as a valid for the creative industries as the ones in hipster postcodes.

How did Camden Collective get started?

What made you want to be involved?

I found this job on Escape the City (global community connecting people to entrepreneurial and social impact jobs), and I thought it was a great opportunity, I thought that was an organisation that was obviously doing a lot for the creative community, Camden and London in general. Just trying to find affordable work solutions, and affordable workspaces for creative start-up companies and I just wanted to get involved. 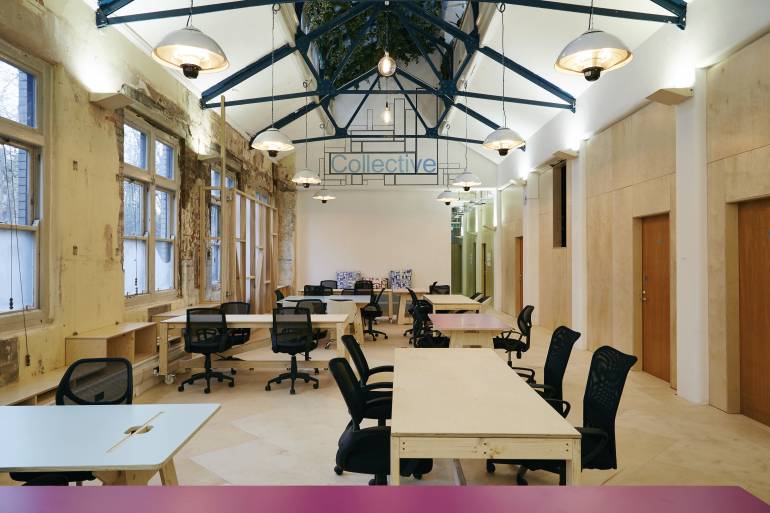 Who can apply for free hot-desking?

For free hot-desking, we’re looking for creative start-ups that are working in the creative field, they have to be within the first six months of trading, and they can’t have more than two employees. So, if it’s two co-founders and an employee that’s fine, but if it’s two co-founders and then three employees then it’s kind of in that line of if you can afford three employees then you should be able to afford some sort of workspace.

What rates can a start-up or new business expect to pay at your hubs?

We have offices here at Temperance that range from £500 to £1500 per month. Those naturally vary in size from about two to ten people. And then, at our other hub in King’s Cross that we share with UCL Advances, we have fixed-desk open plan co-working spaces and those are £250 per month—and all of those rates are plus VAT.

Is there a minimal rental period or number of days required to use desk space?

No, so this is where it’s a bit tricky. We’re not a traditional co-working space, we don’t rent out desks for a certain number of days per week, we have hot-desking, offices or fixed desks. So we do have some people who are hot-deskers and live in Bedford and they come in when they can, but they’re not here every day. But we also have individuals who live down the road and come in every single day, and we kind of examine it case-by-case, so I’m hesitant to talk in blanket statements because people are really familiar with co-working spaces but not with how we’re doing it so I don’t want people to get confused. If you apply to the Camden Collective, you become a member so at Temperance Hospital that gives you 24 access to the space. We don’t monitor how often people are using it. Say if we offered you an office and you only use three days a week , you wouldn’t be charged any differently to people who use the office every day. 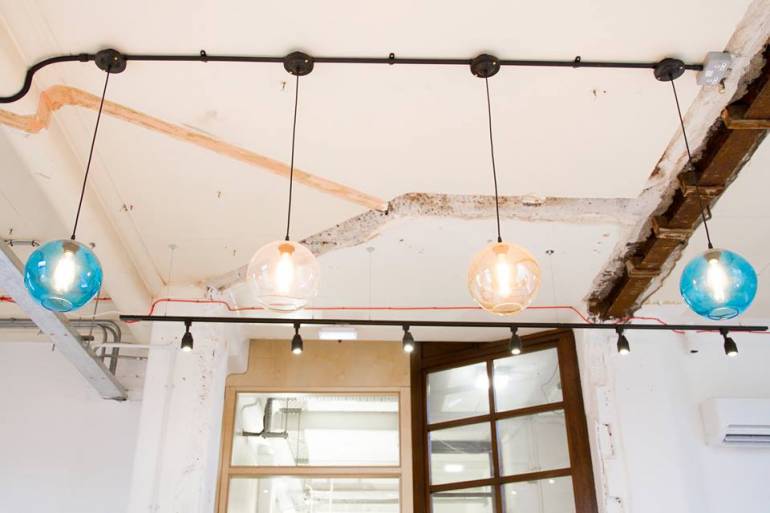 You ask members to contribute two hours of their time a month, what kind of tasks do people normally do?

When people become members, they get 24/7 access, and free wifi…we give people a roof over their head, fast internet and the ability to just get on with it. In return for that, every company that uses the space takes part in review meetings (where we can collect evidence to use for our outputs), and everyone gives two hours of their time a month to help Camden Collective as a whole. For example, a photographer taking pictures of the space for our website, it could be a graphic designer helping to design a flyer for one of our events, it could be peer-to-peer where we pair someone who is doing a crowdfunding campaign with someone who has done one before so they can learn from their experiences. And then it can be just really random tasks like DIY, we might need people to help us paint, or build furniture or design a mural or hang pictures, it can really be anything. It gives them a sense of ownership over the space because then everyone helps to build it up and make it better, and the first rule of the Collective is don’t be an arse! Everyone signs up to the fact that if you join then everyone works cohesively together as a community together.

What kind of individuals and companies work here?

What are the main differences between the two hubs?

Temperance is a lot bigger, we have a lot more people and companies here, and it’s just Camden Collective members in this space, whereas Base KX is shared with UCL Advances so we have a mix of Collective people and people from UCL.

Do you see a lot of collaboration at both Base KX and Temperance? 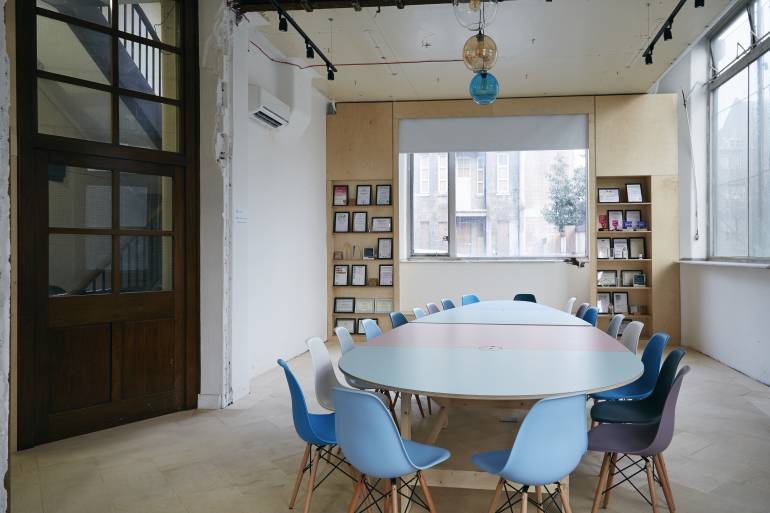 Yeah, definitely, I think one of the benefits of working in a co-working environment is that you get to learn from your peers, and the opportunity to work together on different projects. So, we’ve had a couple of companies work together for example video production companies that have worked with some of our food brands. We’ve had some of our design companies work with a lightbulb company that we have here; you do see some cross-pollenation which is really great.

Aside from the subsidised workspace, is there any kind of mentorship for students or people who are working on their start-ups?

We do offer some courses. We’ve just finished a lean development course, which was not only open to collective members but also to people who are just at the beginning of starting up their own company, so offering them business support to develop their ideas into an actual business. We’ve done that, and we’ve also run accelerator programmes that are sort of the same thing, but just a little bit longer duration. We offer courses in creative and digital skills as well. In terms of member support, we do these things called lunchtime specials. Every month we’ll bring in someone to talk about different topics. Everybody goes to the boardroom, get’s lunch and they get to have a presentation on things like PR on a shoestring, or how to get the best out of Instagram and Snapchat and then they get to learn from either Collective members or people in the industry and ask them questions.

What advice would you give other aspiring co-working space providers?

That’s a tough question, but just speaking generally, people having access to workspace like this is vital especially in a city like London that depends so greatly on the creative industries—I think having access to open workspaces is crucial for creative start-ups. If you had 100 small businesses hiring one extra person each, the impact you would see from that would be huge.

I know you’re quite highly subscribed, is there a waiting list?

If we’ve hit capacity, people can still send an application, and they’ll be put on a waiting list, and notified once space becomes available. We do respond to everyone that applies but sometimes it takes us a while to get through all of the applications! To find out more about events at Camden Collective or to inquire about membership visit: http://camdencollective.co.uk/

Visit here for more cheapo-friendly co-working spaces in London, or here for advice on finding an art studio.

Could this invitation from London Artists Collective be of benefit to you?

2 comments for “Creative Start-Up in London Looking for a Workspace? Meet Camden Collective”