Times have changed: the evolving role of an artist 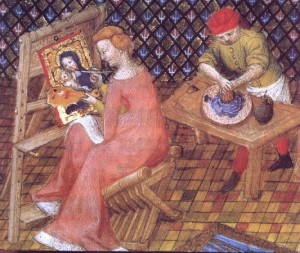 The role of an artist

What is the role of an artist? There is no denying that art from a given time in history or a distinct geographical location can offer  insights into a culture that we would otherwise have no knowledge of. But sometimes art tells us more about the artist than the society and culture that surrounds them. At times, art feels like it reflects the very core of humanity. Other times it is purely aesthetic, a luxury, a rare indulgence. Art can portray the rich complex beauty of the natural world, it can also make bold, ugly, raw statements that are unsettling, challenging and far from beautiful.

Art has had many different purposes throughout history. How has the role of the modern day artist changed?

The changing role of an artist throughout history

It is clear that artists have many different roles, but no matter what medium they use or style they explore, they all share the same purpose: to create art. Art that is beautiful, art that is political, art that is accessible, art that challenges, art that is expressive, art that is cryptic.

The very basic idea is that artists reflect themselves and their surroundings. This could be factual and realistic or surreal, symbolic and expressive. From the days when cave walls were daubed with rich mud to show animals and primitive people, artists have used their medium to show things to others. You could say that the role of the artists is in part to describe life, but also to shed light on aspects that may otherwise be missed.

When you consider the work of Albrecht Dürer, you will recall the fine detail and technical accuracy that he exhibited. This sense of realism was common in art until Cubism and the avant-garde movements came into play, bringing with them a fashion for conceptual, stylised and cerebral work. Different art movements have not only caused the style of art to evolve, but have also caused a shift in the role of the artist.

In the Ancient World, the classical artist was actually a labourer. Painters, sculptors and craftsman were labelled as artisans. They would take over the trade from their father—meaning art professions were not a choice but an inheritance. Artisans practised technical excellence, but there was no formal training and artistic expression was not encouraged.

In the Middles Ages, artists would learn their skill through the apprenticeship system. Most art was anonymous and was produced by people considered to be craftsmen rather than artists. During this time, the art profession advanced the most. In Medieval Europe, master craftsmen were recognised as honourable and responsible members of society.

The Renaissance was the time when artists were recognised for their work, it signified the end to anonymous work. Thanks to Giorgio Vasari and his infamous book The Lives of the Most Excellent Painters, Sculptors and Architects, artists (especially Florentines) started to gain a bit more recognition and respect. Merchants stated to use art to express power and wealth.

During this time art was seen as an indulgence and a luxury. Poets, philosophers, scholars and mathematicians were held in high regard, they were seen as intellectuals and were much cleaner than artists. Artists were anxious to be given the same level of respect as these revered members of society. They started to include more complex themes within their work, adding details that would not be recognised by the untrained or untutored eye. Platonic ideals, scientific theories and astrological details started to occur in Renaissance artwork, changing the role of the artist significantly and paving the way for art as it is seen today, as a way of expression on an emotional, intellectual and even political level.

The Baroque court artist was employed to give a country a sense of persona. It was also used to influence what people wore and how they behaved. In this regard, it was the earliest form of art as a form of marketing. The role of the court artist was one of promotion and advertisement.

By the turn of the 20th century, society artists were painting highly complimentary portraits that portrayed wealth, beauty and good taste. The artist’s role was to beautify the subject of each painting, making them appear more attractive, thinner, paler and more beautiful. These artists were making society seem more appealing, as well as beautifying individuals in a similar manner as Hollywood and the paparazzi do to this day.

When art was made by people who were considered to be artisans, it was very much seen as a job with no room for expression or individuality. Artisans experienced little freedom, and the role was controlled by those in power. When the Renaissance introduced the idea of using art as an expression of independent thought, the first seeds of revolutionary art was shown.

Throughout time, artists have realised that art can play a significant role in shaping history. They have let go of the idea of descriptive art and found a more profound meaning. Revolutionary artists have seen the potential in using art as a form of social progress.

Revolutionary artists such as Diego Rivera and Kathe Kollwitz used their work to literally illustrate revolutionary dogma. Artists such as Goya, Daumier and Munch simply portrayed society in such bleak and disturbing conditions that they made people think about social change. Other artists have been considered revolutionary for their abilities to think outside the box and try new, brave techniques and expressive styles. Their work is not necessarily political or offering social commentary, but it does offer an insight into the times. Artists in this category include Matisse, Manet, Picasso and Cezanne.

Bohemian artists follow a nonconformist lifestyle and abandon structure and convention in favour of art. Bohemians are also enchanted by the discoveries of the Romantics. They believe that emotions are the ultimate truth, there is no distinction between art and life, and they focus on individual expression and the intuition of creativity. Bohemians and Romantics believe in art for art’s sake; art forms the crux of their life, and it’s as important and integral as religion can be for some people.

If revolutionary artists are political radicals, then Bohemian artists are social radicals. They focus on changing how people think, by accessing their emotions. The emotional impact of their art is strong and of great importance. The role of the Bohemian artist also often includes contempt for the middle classes, an element of self-destruction, and a belief that an artist must suffer. The protest against society and conformity often does not take an artistic form, but more of a behavioural one.

The modern-day role of an artist

The modern artist can take on any of those roles, or perhaps even an amalgamation of them all. Many artists have elements of the artisan or society painter in their professional life, producing aesthetic commissions based on the orders of those who pay them. They may also use art to express their own political or emotional landscapes. It is common nowadays for artists to have a number of roles to fulfil different aspects of their lives. Art to make money, art to gain recognition, art to make a statement, art as a form of therapy, art as an emotional release. Nowadays illustrators, graphic designers and industrial designers have taken the place of the artisans of the past.

Perhaps you can recognise several of these roles within your own work. Art can be an escape from reality, used as a chronicle of the times, or be something we all can relate to. It can be a catalyst for change, be instinctive, feed our culture, reflect nature, soothe the soul. It can be an absolute indulgence and luxury, it can be anything you want it to be. The role of an artist is as mercurial as the artists inspiration and ideas, it changes constantly, evolving as the years churn by and adapting with the same frenetic pace as society.

Seeing red: a brief history of the colour red in art

True blue: a brief history of the colour blue in art