Cows-in-Cars – animator Henry Cruickshank is in the spotlight! 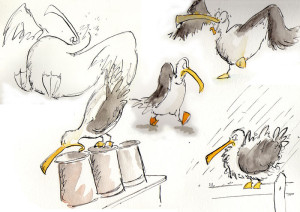 User: 8660
Today animator Henry Cruickshank is in the spotlight – see more of his work at www.cows-in-cars.com

Well first off, I am more of an animator than an illustrator. I generally work in traditional mediums. I also teach animation both as an arts worker and a lecturer. Other than that I have an amazing dog. When did you decide to pursue illustration as a career?

After art college, I hate ‘normal’ work too much, to persue anything other than an arts related career.

I studied at Edinburgh College of Art and graduated in 2003 (which still, in my head seems very resent, sadly this is far from the truth) with a BA (hons) in animation. Before that I studied fine art at Inverness college, while I tried to work out what to do next.

What has been the high point of your career so far?

A number of highs, directing my own animated film staring Josie Lawrence and Tim McInnerny. My first paid job as a storyboard artist at the BBC and working along side Sean Connery’s son Jason. Sean did actually leave an answer phone message at work, it was very long and rambling! And winning an award for an animated film featuring Bonnie (the dog).

But I think the real highlight, and it sounds a bit miss worldy, is seeing the progress that young people can make in some of the arts workshops I am involved with as a tutor. Seeing something really positive come from art beyond awards, accolades and trophy’s is very rewarding.

‘In my opinion, we don’t devote nearly enough scientific research to finding a cure for jerks.’ Calvin of Calvin and Hobbes fame, not John Calvin although I would like to think that he felt the same way…and had a tiger as a friend; This does being up another favourite quote of Calvin’s ‘Reality continues to ruin my life’ which I think is rather apt for myself. Several rather than one, sadly not really any high brow answers here (although I do like a good Picasso sketch), Bill Watterson, Charles Schultz, Gerald Scarfe, Oliver Postgate and Bob Godfrey.

Um not sure, keep plugging away and hoping.

Selling myself/networking. I can’t bring myself to do it, friends have remarked how I manage to turn amazing sounding jobs and opportunities in which I am involved into the mundane when asked what I am doing, while others make the mundane sound amazing.

What feelings or reactions do you hope to arouse in people who view your work? Are you ever surprised by reactions that you get?

Mainly, I hope, a smile which I usually get but I am hoping it’s because of genuine enjoyment not ‘just smile and hopefully he won’t ask any questions, I have no idea what that was about’!

It really depends on the length of the animation I am working on and the medium. Generally if I can get 5-10 seconds done a day I am happy.

The Clash, the Thermals, Of montreal e.c.t but often find myself listening to radio comedy and drama, some times the make it feel like someone else is there!

What are you working on next? Any future plans or projects in the pipeline that we should look out for?

I just finished an animated wedding invite for a friend, I quite like the idea of looking into doing more things like that, something with a personal touch but a bit different.

Being inspired by illustration

Bill Watterson, for creating amazingly funny and heart warming characters and cartoons and also for never selling out and allowing loads of Calvin and Hobbes merchandise or any for that fact. So if your reading this wearing, or you own, a Calvin and Hobbes T-shirt remove it now! Shame on you! I have a fear that some time in the future some horrible lawyer will find a loop hole and my nightmare (I did actually dream this) of an animated TV series with Calvin and Hobbes will come true. It was horrible they made Calvin all cool and hip, don’t let it happen. What feelings, subjects or concepts inspire you as an illustrator?

Depression, sadness, the stupidity of modern life, love, especially unrequited, and the simple good life of animals, particularly dogs. As Millhouse once said, ‘dogs are outstanding’.

The animated Christmas card I made last year, it was a nice reminder that you can make something quickly and it still be just as enjoyable to watch as something that took months. It was also a return to good old pens and paper after a year of prominently flash based work.

For those thinking about turning a passion for illustration into a career, could you give any advice?

Be really good at selling yourself, unlike me! Also keep at it, it does become easier in time if you can just stick out the slow periods.

Any tips on how to get your work seen and get the commissions coming in?

Again be good at selling yourself if not you will just have to rely on talent and hope! But seriously exposure is really important, remember that there are 10000’s of artist out there any without some prompting work is unlikely just to walk your way. Also if you can try and look for some sort of niche or hook for your work, keep all options open but a niche avenue or different style, as long as not too niche will help. Coming soon to a wall near you… Posters & illustrations by the talented Jemma Treweek!