4 ways to get more out of your figure drawings 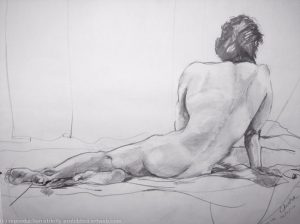 The depiction of the human figure — by way of what may be little more than pencil or charcoal and paper — can be simultaneously a very simple and very intricate practice.

Yes, the human body can incorporate seemingly infinite variations, and it is partly because of this that figure drawing has commanded a reputation for centuries as one of the most rigorous aspects of an artist’s training.

However, a certain clarity of vision is also necessary if you are to get the best results out of your life drawing classes. Here, then, are some exercises and tips that you may find useful for better grasping just a few of the many and occasionally misunderstood elements of figure drawing.

Draw the figure as one shape

The next time you have a model before you, why not ask them to adopt a series of curled-up poses, with their arms, legs, head and neck wrapped as far as possible into a single combined form?

The impression that the model gives with these poses should be as if they have been sculpted from a square block. The idea for you as an artist is consequently to better appreciate how the figure could be seen as one whole shape in one glance, instead of a torso with appendages attached.

So, now that I’ve discussed a little about appreciating the figure as a whole, let’s zoom in on such a relatively small section of the body as the head — which can present its own difficulties for inexperienced attendees of life classes.

If you want to get a sense of just how much we may think we know what the human head truly looks like, while actually being mistaken, get your model to pose in a comfortable reclined position that leaves their head and face resting horizontal to your vision.

The key here is to avoid tilting your own head to get a ‘normal’ upright view of the model’s face. Instead, sketch their head and face as an unfamiliar network of elements —  in which one of their eyes, for instance, is above the other, and the ridge of their nose lies horizontally —compared to how most of us are used to perceiving the human face in our day-to-day lives.

Once you have completed your drawing, only then view the sketch with the head in an ‘upright’ position. When you do, you might be surprised by just how good a likeness you have achieved.

It can be so easy for even relatively seasoned sketchers of the figure to overlook just how profoundly the dynamics of weight and gravity can, or at least should shape how a model is depicted.

To better appreciate this yourself, get your undressed model to seat themselves simply on a chair, with their legs together, arms by their side, feet firmly on the floor and back against the back of the chair. Draw both the figure and the chair as a single entity.

Then, tip the pose through 90 degrees, so that the model is on his back, but arranged on the chair as if they are sitting. Do your best to replicate the earlier pose, and draw them again.

You may wish to do these drawings on the same piece of paper to allow for easy comparison. When you do, you should notice definite differences in the forms, due to the switch in the direction of gravity. Soft tissues like the breasts and stomach should be noticeably pulled downwards in the first drawing compared to the second, with the base of the rib cage also likely to be visibly lower, and the neck at a different angle due to the weight of the head.

Experiment with dressing the model

It’s an understandable question asked by many newcomers to life drawing, why such classes so routinely involve a nude model when in real life, almost everyone is usually seen clothed.

There are reasons for this that I lack the space to address here. However, one good reason is that even if you only ever wished to draw clothed figures, it would still be extremely insightful and helpful for your efforts to become a better draughtsperson to explore and understand the figure beneath the clothes first.

Furthermore, with clothing typically being made to fit the human body in any case, there is an interdependence between the clothing itself and the body’s structure, form and dynamics. In effect, clothing can be seen as one or more additional ‘layers’ of skin, which is a notion you may wish to keep closely in mind during your figure studies.

Even simply performing one exercise with your model dressed in a bed sheet or a similar piece of fabric, and another in which they are wearing a discernible garment, such as a dressing gown, can bring very different dynamics and insights into the relationship between the figure and clothing.

The above, of course, are just some of the experimentations that you may make with regard to the shape, features, weight, structure, clothing and other dynamics of your life model.

Which exercises have most helped you to gain greater value from your figure sketches? Feel free to share your thoughts in the comments section below.