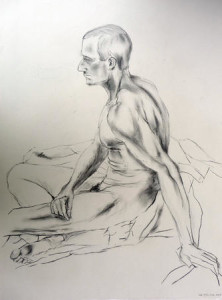 Have you noticed that even in towns and villages where there may otherwise be very little formal art instruction on offer, there almost always seems to be a life drawing class going on somewhere? It’s almost as if, as human beings, we just can’t get away from the challenge and reward of depicting the kind of body that we, ourselves, own.

This is true, and here at ArtWeb, we’re written before about how you can get more out of your visit to a life drawing class. However, there’s more to the task of portraying humans truly convincingly than simply turning up to the session, so we thought we would share a few (in some cases lesser-spotted) practical tips.

1. Don’t be too stringent about proportion

This may seem rather odd advice for life drawing and painting – after all, we all have an instinctive sense of what is ‘right’ or ‘wrong’ proportion in the depiction of a human figure, so if one arm is shown longer than the other for no explicable reason, we tend to instantly notice this.

However, especially when you are just starting out, it’s probably best to think of the generally accepted ‘rules’ on proportions as guidelines rather than strict regulations. While it is widely accepted, for instance, that the body is approximately seven and a half heads high – which makes one head a useful unit of measurement – it’s rare for an actual human being’s proportions to comply exactly with this ‘ideal’.

2. Develop a working knowledge of the skeleton

We may no longer be in the era of widespread anatomy classes in art schools, but it can still be helpful to know a decent amount about the body’s underlying structure when drawing or painting the figure. After all, many bones are at least partially discernible under the muscle and flesh with which they are covered.

Naturally, both the pose and physique of the model influence exactly how much of their skeleton you can see. Presuming that the model is of ‘average’ physique, the ribcage and the collarbone will be visible, as well as possibly the top bone of the pelvis. The knee, ankle and shin’s bony structures can be seen regardless of the model, as these are covered only by skin.

3. Remember those muscles will be working, too

As with the skeleton, the body’s network of muscles is astoundingly intricate – so it’s just as well that you don’t have to memorise them all to create effective drawings or paintings from life.

However, it is crucial to at least appreciate the difference between tensed and relaxed muscles, given how this changes the shape of the limbs. Consider the biceps, for example – when it is flexed, it bunches up, resulting in a pronounced bulge in the upper arm. Similarly, the calf muscles aren’t obvious when they are resting, but if you watch a person walking around a room or climb up stairs, you will see how these muscles flex and relax.

While artists understandably love to draw or paint the nude – the sheer complexity of the unclothed body’s interconnected forms makes it endlessly compelling – when you add clothing to the mix, in some ways you might be thankful, and in other ways, it could just be the bane of your life.

You might imagine that clothing would generally disguise the figure rather than make it easier for you to depict the underlying body accurately – and in many ways, this is true, such as if the model is wearing a thick overcoat. However, the model’s clothing can also give you clues to enable you to define their bodily form, whether it’s swimsuit shoulder straps that narrow as they curve away around the shoulders, or simply the neckline of a T-shirt that follows the curve of base of the neck.

5. Model the body with colour

There seems to be a perception in some quarters that it’s more difficult to paint the body than to draw it. However, this isn’t really the case. Sure, you have to think about colour, but you may find that the ability to use colours makes your task easier rather than harder, because you can describe the body’s colours more accurately instead of having to convert them into shades of grey.

When you’re modelling form with paint, it’s especially vital to separate ‘warm’ colours such as reds, yellows and oranges from ‘cool’ colours, like blues, blue-greens and blue-greys. The former type of colour tends to be used for the parts of the figure most bathed in light, while cool colours are often reserved for shadowy areas.

The above guidance is only a tiny fragment of all of the advice that could possibly be given on how to draw or paint convincing human figures. With that in mind, you should never be complacent in taking on what remains possibly the ultimate test for any artist, remembering that there is always something more to learn.

What are your own favourite tips for drawing and painting the figure more effectively? Feel free to share them in the comments section below. Alternatively, you might be interested in reading more about the longstanding role of the human body in art.

Learning to Paint: Tips on Where to Start