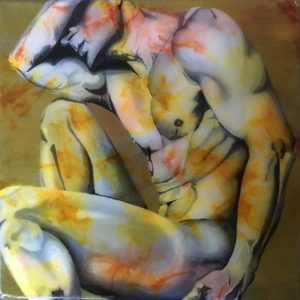 Many of us may have a sense of what we think male nudity ultimately means — in this, or any other era. But for a fuller appreciation of the complexity of the subject, including changing attitudes over time, one must look not merely within the furthest reaches of our own living memories, but instead back centuries, and perhaps even thousands of years of human civilisation.

Manifestations of the male nude in art have, after all, long been reflective of wider societies’ views of male nakedness in real life.

The colourful journey of men’s nudity… or nakedness

Kenneth Clark, in his seminal 1956 tome The Nude, posited the still-enduring thesis that “to be naked is to be deprived of our clothes and the word implies some of the embarrassment which most of us feel in that condition,” while the word nude suggested not “a huddled and defenceless body,” but “a balanced, prosperous and confident body: the body reformed.”

Clark also reminded his readers of the ancient Greek custom “that in the gymnasium and the sports-ground… young men displayed themselves totally naked.” It’s fair to say that the male nude in art has undergone something of a chequered history since then.

Fast-forward to 1978, and Margaret Walters observed in her introduction to The Nude Male: A New Perspective that “the male nude is a forgotten subject. For most people the word nude conjures up the image of a naked woman — a pinup in a girlie magazine or a Venus de Milo. Over the last two hundred years or so, most artists interested in the human body have been obsessed by the female nude.”

But in a current era of readily available online pornography, celebrity nude leaks and ‘confessional’ self-made material on ‘hook-up’ sites and apps, what can the male nude – in or out of art – now be truly said to mean?

The contemporary male nude — a new kind of performance

The male nude of the late 20th and early 21st centuries has certainly honed its transgressive verve through the world of out-and-out performance art, as in such noted examples as Keith Boadwee producing video loops depicting himself shooting streams of paint from his anus to create Pollockian painterly marks, or Bob Flanagan nailing his penis to a wooden board.

But male nudity has also taken somewhat gentler and tender forms in the art of recent decades. One might think back, for instance, to the Chinese artist and activist Ai Weiwei’s One Tiger, Eight Breasts, which he published on Twitter in 2010. While the image played on the Western tradition of artists’ portraits with their assistants or models, it emphasised a suitably 2010s notion of equality in its disruption of the perennial power relation between the clothed male artist and the naked female subject. All five of the image’s subjects – including the artist himself – were unclothed.

Such hot-button issues as age and disability have also been addressed in male nudes of the last few decades, the latter by Artur Zmijewski’s large-format photographs and videos showing able-bodied people ‘lending’ a limb to help individuals with physical disabilities to stand, walk and wash. The former, meanwhile, was intriguingly embraced by John Coplans in confrontational black-and-white close-ups of his body dating from his sixties — in the process, defying society’s tendency to disregard old age as ugly and unwelcome.

Exploring the possibilities of a ‘female gaze’

But what of efforts to inject eroticism and even, dare we say it, objectification into the recent male nude in art, backing up Walters’ contention in the ‘70s that women were capable of viewing men — as men have traditionally viewed women – as sex objects?

A powerful case study here may be found in Paula Winkler’s series Centrefolds, which investigated the art-historical role of the male nude and how the male could be viewed in accordance with the female gaze. As Winkler told the art publication Elephant: “The male nude has been a genre in photography ever since its early invention, but mostly from a gay perspective. I do love those images, I always have, but I felt as if they were not directed at me and this bothered me.”

Her own snaps of the male nude combine conventionally attractive and traditionally masculine bodies with a certain playfulness quite unlike the disengaged poses associated with the subject in classical art.

It seems, then, that even as we look to the 2020s, engaging new possibilities are continuing to be uncovered for male nudity — in art, as in life. What part does this subject play in your own artistic practice, and are you intrigued by the dynamics of the nude across the gender divide? Feel free to let us know your thoughts in the comments section below.

To find out more about nude body art, check out our blog, The Nude in Art: the most natural expression of humanity.

Further reading:
Do You Dare Take On the Challenge of Nude Self-Portrait?
Getting The Most Out Of A Life Drawing Class

‘Phenomenology’ – painter Jenny Clark is in the Spotlight