Interview with Tag Beckett: painting, positivity and finding your own visual language 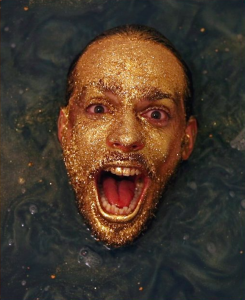 In this artist interview, we speak to Dublin-based painter Tag Beckett about process, positivity and manifesting your own visual universe.

Can you tell us a little about yourself and your work?

Hello, My name is Tag Beckett — well, that’s the name I make art with. I was named after the Irish playwright Samuel Beckett, but my amazing dad has called me Tag since I was a boy; when in the business of imagination and creativity, I thought it was important to make up a name. I now get letters all the time to this name I just plucked out of my head — I think that’s amazing. This September will be the tenth year since my first exhibition, so I have been throwing paint against a wall for ages now, and people seem to like it, so I think I’ll keep doing it!

What were your motivations for becoming an artist? When did you realise this was something you wanted to pursue and how did you start?

I think the reason humans are here is to push creative consciousness further. I believe making art is the best way to use my time and I have wanted to be an artist my whole life. I was quite a gentle child and I would draw for hours in my room. I’d draw these men that were really ‘cool’, that had big muscles and could grow beards, they went on adventures and did all the things I was afraid of as a 10-year-old. The best advice I was ever given was to paint; it seems obvious, but if you want to start painting, make loads and loads of paintings! I also think it’s really important not to worry if the work is good or bad, just make the thing, and if it’s bad just make something else — you are not limited to the amount of work you can produce.

Your work is littered with recurring motifs — skeletons, wolves, balloons, etc. Can you talk a bit about how you developed that visual language and why you’re drawn to these particular symbols?

I like to think I’m creating a kind of visual universe and there are certain characters that have a bigger role in the story. I could paint balloons all day. I think they’re such a beautiful symbol for life. They are super solid but also at any moment they can pop. The older I get, the more I realise that you never, ever know what’s going to happen the next day. I’m trying to just be as present as possible.

What and who inspires your art?

My sister. She is one of the most amazing people I have ever met. She’s a primary school teacher and has traveled all over the world. I have also just become aware of this YouTube channel where a guy makes up words for feelings. I saw the word ‘oléka’, which means the awareness of how few days become memories. Since, all I have wanted to do was make something with this title.

Can you talk us through your process?

Late at night, when it’s really quiet, when I’m in the shower or out walking, for a split second my mind clears. The chaos stops just long enough for an idea to slip in and I have to write it down as fast as I can, or it will leave as quickly as it came. Some of my best ideas have been lost this way. I think it’s important that the art should decide the size and shape of the piece, not the canvas. So when I have an idea that tells me its dimensions, I cut the wood and sand one side, stretch the canvas then slowly build up layers with oil paint until it tells me it is done.

What’s been the highlight of your career so far?

Many years ago, I was in the oldest pub in the world (in Athlone, right in the middle of Ireland) with my dear friend Tadhg Kelleher. We were talking about how when he played music and I painted at the same time it really morphed together. After a few creamy pints we decided to do it for 24 hours straight and after about 2 years of people saying ‘no’ to the idea, on the 3rd of December 2017 we did it at a space in London. It’s my highlight because I think it’s important not to give up on something you believe in. I have never wept harder and deeper when Tadhg and I hugged after it was done. I also made a giant womb for a music festival in 2016. People were so happy with it that after a day it had to be shut down because too many people were using it.

I’m particularly drawn to your use of colour. Your work seems to get brighter each year, even when the subject matter, skeletons, for instance, have the potential to be quite dark. What’s behind the impulse to brighten those things up?

For me, I think of my work like when people hide medication in sweets. The world is dark enough already, so that’s why they are big and bright, but I also think it’s important to talk about those things: heartbreak and depression, life and death. It’s like a trick; you see this big bright pink painting, but it’s actually about something much deeper.

Plans for the future?

Make some lunch! I have a great idea for an exhibition called ” Tag Beckett vs The Scramp”, so I’m excited to show the world this when everything opens back up.

Where can people see more of your work?

To keep up to date with my movements, the best place to find me is @tagbeckett on Instagram. It’s the only social media I have. Or you can see more of my work on my website.

Coming soon to a wall near you… Posters & illustrations by the talented Jemma Treweek!