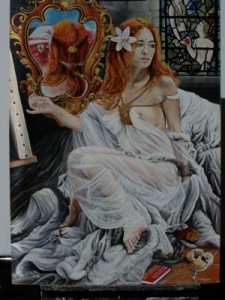 I have always been interested in certain types of art and from a young age I could always get a likeness and capture something of the person I was drawing or painting. I had never taken my artwork too seriously – there were always too many other distractions! – but as I’ve now turned 50 and those distractions have faded, I’ve returned to my first but neglected love.

What made you decide to take up art?

I was told to take up art by some very encouraging teachers who discerned that I had some degree of talent for the subject. Once word got around, I became popular with friends in my youth to decorate their Levi jackets, wall murals, their bikes etc with designs of their choosing: Ken Kelly’s Ritchie Blackmore’s Rainbow Rising album cover was a most popular subject! I have had very little artistic training (Oh yes – we can see that, say the critics amongst you… Thanks a bunch!) As a mature student I studied history and literature at degree level before becoming a teacher – hence my love of narrative paintings. Although I was sent to life classes by my teacher at 13 years old, I quit after a few weeks because I couldn’t afford a folder or even a decent pencil!

What has been your best creative achievement so far?

Isn’t your greatest achievement the idea that’s now forming in your mind, the sketches you’re just made and the painting you’ve just begun? In other words, my best painting is my last one and the next one will even be better! Look out next month when I upload my latest four paintings! Apart from that, my first success was getting a picture in a National Trust magazine at the age of 11.

There are just so many clever and meaningful things that have been said to choose from, but here’s an unfamiliar one for you – or a lyric really – from Jason Perry of ‘A’ and McFly association and a talent who I performed with for six years: ‘If I only had a minute then a minute would do; to tell you in a minute what a minute could mean for you.’ This song was called ’11:59′ and went something along the lines of ‘seize the day!’

Crikey! There are too many to choose from! Bouguereau most definitely and Waterhouse, Draper, Poynter,Godward, Taderma, Falero and other figurative painters from the 19th century. Nearer to date, it would have to be Vallejo, Pitre and the like.

I’m not overly ambitious to be successful – especially if that would mean being dishonest to myself. I only want to produce works that I would be proud of to hang on my own walls (Oy! Don’t be cheeky! I have actually earnt a few quid through doing a number of commissions!) I’ve met a few artists who churn kitch stuff out cheaply for the coin in the palm. You might as well go and work in a factory. I’m actually aiming to sell a few more of my paintings so that releases some more wall space on which to hang even better and superior works yet to be realised! Well, it would help if I got my act together and got myself re-activated on Paypal once more – I also need to put myself around a little bit. I used to get commissions via word of mouth back home (Lowestoft) but since moving to Winchester for the day job, I haven’t instigated links to get established in a similar capacity. (It’s actually taken four months to get my website functioning correctly!)

Nothing more than excuses, really. However, I have at least got my act together in so far as getting on artweb. At least this is one way to let people know what I am producing. If anyone likes what they see, they can always contact me. I promise I will answer any emails received… Even if it is a week or so later when I do (are you starting to see a pattern developing? – no I’m not lazy: just busy!!)

What sort of feedback to you get from people see your work?

Generally, the feedback I have received is positive – but this is obvious really, as mostly it comes from friends and family who probably do not wish to offend if they still want a Christmas card this year! Elsewhere, at small and shared exhibitions, people have either really praised my work while others have said it’s not for them. In all fairness, the latters’ own work wasn’t worth tuppence either!

In a nutshell, about two months. These are quite big and detailed oil paintings done on board. My output could be greater if the paintings were smaller and if I was able to paint full time without having other distractions such as earning a crust and supporting a family which includes a mad Staffy who requires two hours walking every day!

I always listen to something classical when I work, and this is more smoothing rather than ‘slap-you-round-the-face’ type of stuff… Mozart, Haydn, Beethoven, Dvorak etc. When I’m not working, then it’ll more than likely be rock based: Zep, Floyd, Roxy, Beatles, Stones, RadioHead, in fact most things from the 60s and 70s …. But definitely not Jazz!!!! What is next in the pipeline for you?

We’ll see how the day job pans out (the wages aren’t grand and Winchester is expensive to live) and if no significant improvements occur in the foreseeable future, then it might be back home to Lowestoft to fall in with the same old bad habits which might include a worthwhile commission here and there. (I did say I’m not overly ambitious!!)

Being inspired by art

Bouguereau is the master and what an inspiration. Despite not always being in favour or appreciated, his paintings are absolutely beautiful. Thanks to some quality images available on the internet, one can be left breathless from how he has achieved such skin tones, drapery, penetrating eyes, dextrous fingers, toes and trees with every individual leaf outlined.

What feelings, subjects or concepts inspire you as an artist?

For me, it has to be figurative. If a painting is not primarily focused on an indivudual or individuals, then at least a landscape or seascape should at least feature a person or a few! I also like a painting to mean something – maybe to tell a story or to impart some felt emotion or experience. Others will prefer paintings of buildings or boats or pets or just some randomly organised colours into basic shapes or patterns etc. Ah well! One man’s meat is another man’s poison.

Charlotte of Shalott is one of my favourite works (the painting is much better than the photographs suggest) as this is very much my attempt to produce a narrative painting in the vein of a modern pre-Raphaelite, with so many clues in it as to what is going on. This painting can be passively taken at face value, or with a little bit of thought, one can discover why the Ferrari badge is reflected in the mirror and why Tom Wolfe’s ‘The painted Word’ lies on the floor, for example.

What do you think it takes to make a good an artist?

Truthfully? It obviously takes a certain natural bent or at least an inclination to produce art – and then it takes lots of effort, practice and time.
To be cynical, a good artist needs great marketing, a great agent and a public eager to be told what constitutes as good art. Shooting Stars? Not Paul Blake (But Jesus Will Do)