By Rebecca Wall in Art And Culture

In 2020, few can utter the phrase ‘going viral’ in the carefree manner once used to describe YouTube sensations and internet memes. Against the backdrop of the public health and economic crisis caused by COVID-19, however, an Instagram campaign initiated by British artist Matthew Burrows, the #artistsupportpledge, has generated an estimated £20m of sales for artists across the globe.

As countries across Europe moved into lockdown in early March, Burrows, who is also the founder and director of the artist mentoring scheme Artist Support Projects, received message after message from fellow artists whose commercial exhibitions or work as teachers and technicians had been cancelled, and whose already precarious income was being placed in even greater jeopardy. Brainstorming ideas for how he and other artists could help each other, on March 16th the Artist Support Pledge was born, as he posted his first artwork for sale under the hashtag. Within a week, the movement had led to sales of over £9m, and at the time of writing the hashtag has been used in over 273,000 Instagram posts. 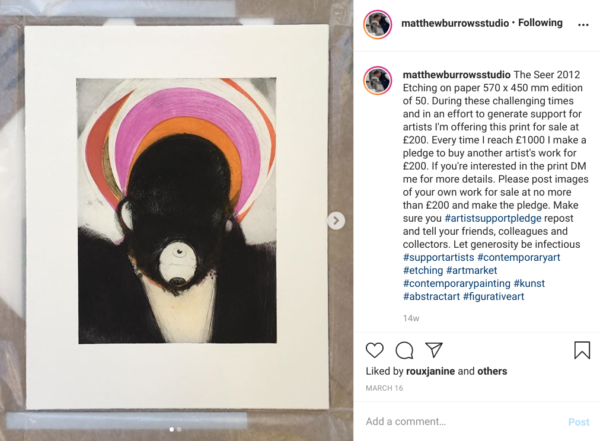 How does Artist Support Pledge work?

The concept is simple: artists offer work for sale on Instagram under the #artistsupportpledge, priced at no more than £200 (excluding shipping). Those interested in buying a work contact the artist via direct message, and when an artist reaches £1,000 of sales, they agree to spend £200 on the artwork of others taking the pledge. 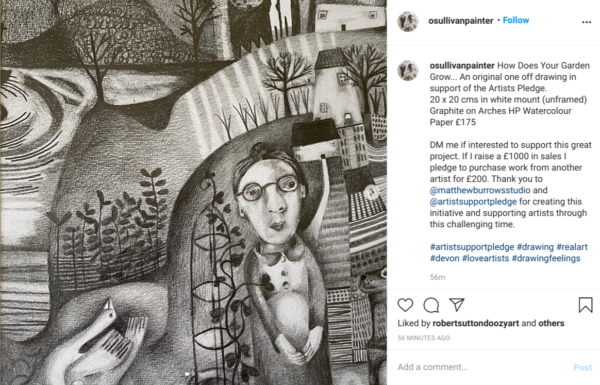 Who can take part?

Burrows’ vision for the pledge is that of a ‘culture of generosity’ supporting artists worldwide. Although many of the works listed under the hashtag are paintings and prints, the initiative is now being supported by the UK Crafts Council, who are encouraging makers of all kinds to take part and support the pledge, including ceramicists and jewellers. 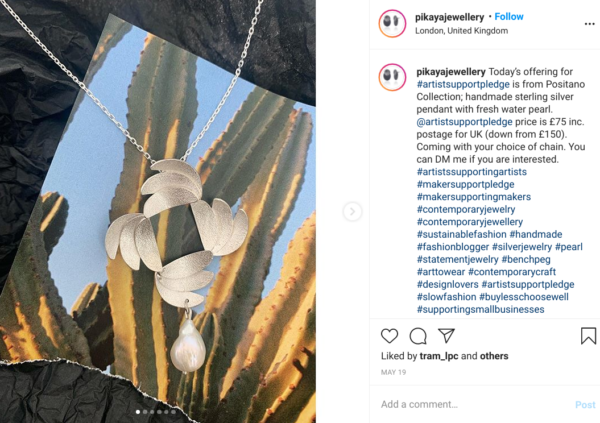 What impact has the pledge had?

The campaign has swiftly spread across the world, taken up by artists in the UK, Europe, North and South America, Asia, Australasia, and Africa. The estimated £20m of sales that it has generated has proven to be a vital lifeline for artists, many of whom have fallen through the cracks of support offered by governments in the wake of the coronavirus. Crucially, this support has been generated as part of a self-sustaining, peer-based model.

One participant declared, ‘I’m self-employed and can’t get benefits [be]cause I’m technically still a student (doing corrections on a PhD with no funding and now no job). The money from the pledge will help a lot and although it’s a stop gap, it will allow me to breath and consider my options. I also bought a friend’s artwork today, a friend with kids and a mortgage. He was also appreciative.’ 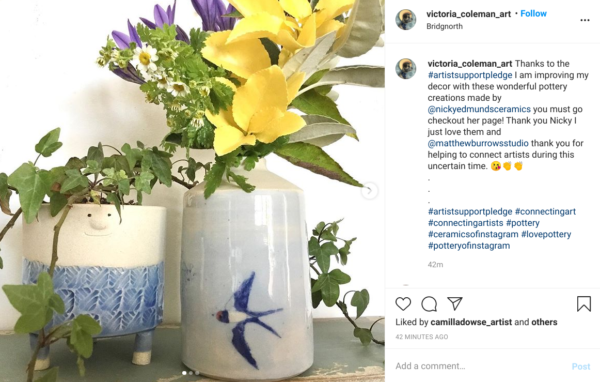 Speaking of the impact of the pledge, Burrows declares, ‘I am a little awestruck yet completely delighted by the momentum and viral take-up of this campaign. It is not just an important network and survival mechanism for artists; it has become a global movement, a generous culture, and a gifted and egalitarian micro-economy, perhaps even a new economic model.’

Artists interested in taking part in the pledge can read more about it here. Those wishing to purchase artworks offered under the pledge can browse thousands of works for sale on Instagram here.

Preparing for a recession as a contemporary artist

Fraser’s Work Is A Beautiful Game….